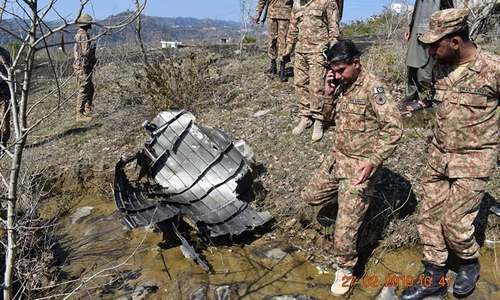 Pakistan Air Force (PAF) on Wednesday — a day after India violated the Line of Control (LoC) — undertook strikes across the LoC from Pakistani airspace.

“The sole purpose of this action was to demonstrate our right, will and capability for self defence. We do not wish to escalate, but are fully prepared if forced into that paradigm,” the Ministry of Foreign Affairs(MoFA) said in a statement.

Maj Gen Asif Ghafoor, the director general (DG) of Inter-Services Public Relations (ISPR), confirmed the development via a tweet, adding that “in response to PAF strikes this morning, as released by MoFA, IAF [Indian Air Force] crossed [the] LoC.”

“[The] PAF shot down two Indian aircraft inside Pakistani airspace. One of the aircraft fell inside AJ&K [Azad Jammu and Kashmir] while [the] other fell inside IoK [Indian occupied Kashmir]. One Indian pilot arrested by troops on ground while two in the area.”

While addressing a press conference an hour after his tweet, Maj Gen Ghafoor said that another pilot has been arrested.

“Our ground forces arrested two pilots; one of them was injured and has been shifted to CMH [Combined Military Hospital] and, God-willing, he will be taken care of,” said the army official.

“The other one is with us.”

“Today’s action was in self defence; we do not want to claim any victory. The way we set out target and made sure that there were no collateral damage — the in-built message was that despite out capability, we look towards peace,” said the army spokesperson.

“Today morning, Pakistan Air Force engaged six targets at the LoC. Because we are a responsible state and want peace, we decided that we will not use any military target.

“As a result of engaging our target, no human life was affected. Staying within our jurisdiction, six targets were locked. And we carried out the strike,” said the army spokesperson.

“Pakistan is not pushing the environment towards war,” he made it clear, adding Pakistan deliberately avoided escalation. “If that were the case, we could have easily engaged the target, which our Air Force had locked. That would have resulted in human casualties and collateral damage as well.

“We engaged a nearby open space where there were no human lives or military posts. We deliberately avoided the escalation. We only wanted to demonstrate that we could have easily taken the original target, which was their administrative setup and military post. But we did not do that.”

‘Demonstration of our capability’

Regarding the upcoming meeting of the National Command Authority and potential use of nuclear weapon, the DG said: “I have always said that we must not talk about this. It is insane to talk about this. It is a capability and a weapon of political choice. Neither is this our level nor is this a topic that should be talked about.”

“The airspace is closed due to the environment. Pakistan’s response is actually not a retaliation. It is the demonstration of our capability, capacity and will. We stayed within the domain of responsibility as a state that has the potential [to respond].

“We don’t want to escalate the situation. It is up to India now whether they go for the way that we have suggested and which is the requirement of this region: peace. But it is understood that if aggression is imposed on us, then we will respond. But that will be under compulsion,” he added.

“Pakistan has taken strikes at non military target, avoiding human loss and collateral damage,” said a statement by the Foreign Office. “For the last few years, India has been trying to establish what they call ‘a new normal’, a thinly veiled term for doing acts of aggression at whatever pretext they wish on a given day.

“If India is striking at so-called terrorist backers without a shred of evidence, we also retain reciprocal rights to retaliate against elements that enjoy Indian patronage while carrying out acts of terror in Pakistan. We do not wish to go to that route and wish that India gives peace a chance and to resolve issues like a mature democratic nation,” the statement added.

A day earlier, the army spokesperson said that the prime minister had asked everyone to get ready for every eventuality. “We are all ready. Now it is time for India to wait for our response,” he asserted.

“The response will come at a point and time of our choosing where our civil military leadership decides, and as a matter of fact, has decided,” he had said, reiterating the statement issued after the National Security Committee (NSC) meeting convened by Prime Minister Imran Khan.

“We are peaceful; we didn’t escalate, India did,” said Foreign Minister Shah Mahmood Qureshi while speaking to ARY. “We exposed their escalations and their false claims, we offered international observers to come and examine the claims of India.

“India, listen: this is a new Pakistan, [there is] new enthusiasm, new valour,” he cautioned the neighbouring country.

“The nation is united, each and every child is standing by the Army and Kashmiris. Even today, our preference is peace. India should review its designs. A new Pakistan has been established,” Qureshi said.

“The next course of action will be devised after the NCA [National Command Authority] session in which military and political leadership are participating,” he added.

Prime Minister Khan has summoned a special meeting of the NCA today. The NCA is the apex civilian-led command headed by the prime minister to oversee the policy formulation, exercises, deployment, research and development, and operational command and control of the country’s nuclear arsenals.

This is a developing story that is being updated as the situation evolves. Initial reports in the media can sometimes be inaccurate.