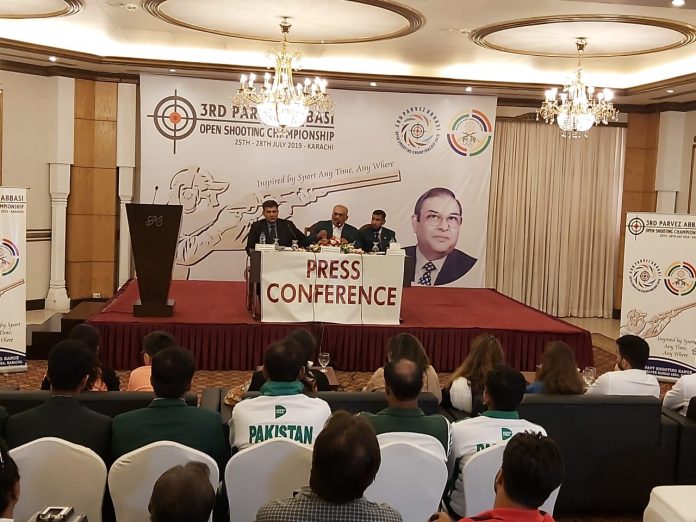 This is a unique event in Pakistan’s shooting calendar, as the tournament is open to everyone including the general public as well as teams representing Pakistan Navy, Pakistan Army, Pakistan Air Force, Police, and other law enforcement agencies.

Over 400 shooters will compete in Air Pistol, Skeet and Trap categories during the 04-days tournament.

This annual event is held to celebrate the life and achievements of Mr. Parvez Abbasi (Late), the founding secretary of the National Rifle Association and the driving force behind the promotion of shooting sports in Pakistan.

All the events will be conducted as per the rules laid out by the International Shooting Sport Federation, the governing body of the Olympic Shooting events in Rifle, Pistol, and Shotgun categories.

Parvez Abbasi Open Shooting Championship is a vital addition to the sport’s annual calendar in Pakistan. This is a great chance for budding shooters of the country, from whatever background, to compete and further hone their skills. We are delighted to be honoring Parvez Abbasi’s legacy in this way.

Our aim for this competition is to fulfill Mr. Abbasi’s dream and vision of improving the image of shooting in the country. We would like to create an inclusive learning environment for the competitors to understand the importance of sports and to support the shooting community. With this championship, we would not only like to pay homage to an inspiring man, but we would also like to invite and motivate the youth to explore their passions and follow in his footsteps of living a fulfilled life.

We extend an appreciation to the Abbasi family, especially Mrs. Askara Abbasi, wife of late Parvez Abbasi for patronizing the event and providing yet another opportunity to sports enthusiasts to compete in a ranking event and Pakistan Navy for extending all-out supports for providing the venue and men power for managing the event in a highly professional manner.

Mrs. Askara Abbasi with her family members will be the chief guest at the closing ceremony scheduled to be held on July 28th, 2019.

Mr. Abbasi, a man of vision, direction, and achievements throughout his life, graduated from Govt. College Lahore and attended numerous courses in Finance and Marketing from reputable local and international institutions.

Parvez Abbasi was the Founder Secretary-General of the Sindh Rifle Association from 1962 to 1976. He was then elected the Executive Vice President, a post he held till his last breath. He was also the Secretary-General of the National Rifle Association of Pakistan from 1972 till 1998 before he was elected the Executive Vice President in 1998.

The spirit of sportsmanship was of prime importance to him during his early years and this saw him achieving and winning. Being an active participant of the sport himself, Parvez Abbasi held the national record in the Rapid Fire Pistol for 30 years. He won 12 National Medals in different Pistol events. He also represented Pakistan as a player and Captain of the National Team in the Asian Games in Tehran.

He represented Pakistan in different capacities in various International events Commonwealth Games/ Asian Games /Olympic Games /SAAF Games (as Judge /manager/ Captain /Player/Secretary-General SAAF Shooting Association). It was due to the efforts of Parvez Abbasi that Pakistan qualified for the first time for the Olympics, in the year 2000. He himself participated as a jury member for shooting at the Olympics in Greece in 2004. He was appointed “A Class Jury Judge – Shooting” by the International Olympic Association, a sole record so far for Pakistan.

A lively, active and leadership personality, Mr. Abbasi remained associated as a member of prestigious institutions such as Institute of Chartered Ship Brokers and the Institute of Transport, etc. He also served as Member Managing Committee and Senior Vice Chairman of FPCCI, Vice Chairman and Chairman of Pakistan Ship’s Agents Association.

The unique combination of nearly twenty years of international expertise in shipping/stevedoring and oil and marketing industry led him to launch his own businesses, which over time included many companies related to different sectors, including port operations, Oil Refining, Information Technology, and Automotive sector.

He left for his eternal abode on the 25th of July, 2006. We pray to Almighty Allah to grant him an exalted place in His heavenly abode and to allow us to fulfill his dreams and the vision he had for this sport.