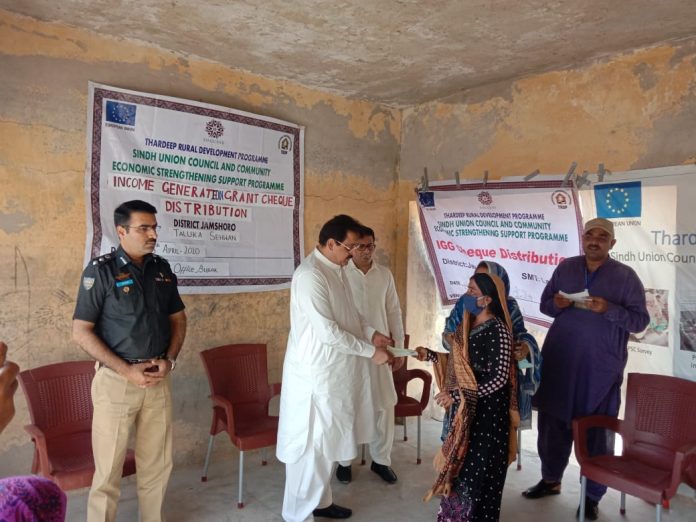 TRDP Under the supervision of CEO-Dr Allah Nawaz Samoo, launched a cheques distribution program through Income generation grant to the poorest households of Manchhar Lake area in union council Bubak of taluka Sehwan of Jamshoro district on Wednesday.

CEO TRDP DR Allah Nawaz Samoo promised to continue the support to poorest families according to schedule and policy.

This village Moula Bux Mallah is located at embankment of Manchhar lake and inhabitants are facing starvation lives due to destruction and increasing pollution of Manchhar lake.

Speaking to the program, PPP MNA Sardar Sikandar Ali Rahpoto said that in the current situation, markets are closed due to locked down of Corona Virus Diseases but TRDP staff continuing distribution of cheques (cash) of income generation grants to the poorest house households. He said that it was major support among the poorest families located union council Bubak of Manchhar lake embankment.

Speaking to the program, DC Jamshoro captain rtd Fareed U Ddin Mustafa said that by using income generation grant provided by TRDP under EU funded SUCCESS Programme, the poor households are starting small grocery shops for securing their livelihoods needs. He said that through this IGG income; the livelihood of the poorest would be strong in this situation.

SSP Jamshoro Amjad Shaikh said that the condition of families living in union council was poorer and this amount would be beneficial for their livelihood.

Assistant Commissioner Sehwan, Noor Ahmed Khahro said that the priority was given to the women in distribution of cheques of IGG through EU-European Union Program.

ASP Anila  Rajpar said that through such support of Income generation grant of EU in this locked down situation, the beneficiaries’ women/ head of poor families were supported in the on going program of SUCESS of European Union.

Speaking the program, Manager TRDP district Jamshoro Nasreen Khan said that selection of household families was on perfection and on merit through survey conducted by TRDP. Abdul Samad Phulpoto coordinator HRD-Human Resource Development of TRDP  said that these women/house holds were the part of 500 households of district Jamshoro and distribution of  IGG –Income Generation grant of TRDP under EU funded SUCCESS Programme was going in Jamshoro district and it would be followed according to schedules.

Jai Parkash, the program manager of SUCCESS program TRDP congratulated the teams to work in this situation of locked down and provided the cheques of Income Generation grant of TRDP under EU funded SUCCESS Programme at door steps.

Moula Bux Mallah Local Inhabitant and head of village Moula Bux Mallah of union council Bubak ( Manchhar lake) said that they all poor families/households were thankful the TRDP CEO Dr. Allah Nawaz Samoo and his team to help them for their livelihoods through Income Generation grant of TRDP under EU funded SUCCESS Programme at doorsteps. He said that this first team of NGOs of TRDP reached their houses and provided the cheques to the real poorest families.