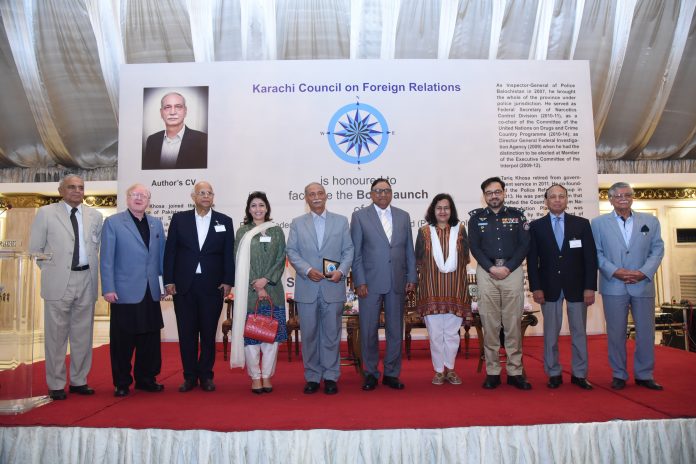 Speaking on this occasion, IG Police Sindh Dr. Kaleem Imam expressed that image of police department is torn not by the cop but due to lack of leadership. We are managers are responsible for this situation where no one is ready to trust in police. Personalities like Tariq Khosa are role models for police officials, he paid tribute.

Police is always on forefront while maintaining law and order situation and over 7000 cops of this force are martyred in the line of duty. There is need to enhance capacity and skills of police. We have to ensure good policing. Check and balance is very necessary for police officials but police managers will have to inculcate professionalism amongst them, he stressed.

Dr. Kaleem Imam deplored that at present, everything is being run on ad-hoc basis and every person wants police to do policing as per their wish. If football team is not playing well than hockey team wont play instead rather we will have to improve game of football team actually, he added.

Author of the book “Inconvenient Truths”, Tariq Khosa discussed his book in details and told that he has recommended six points doable strategy for reforms in police and state institutions. He also included eye witness accounts of hanging of former Prime Minister Zulfiqar Ali Bhutto and few more incidences.

We have the best armed forces with nuclear deterrence. World has already witnessed our response to any eventuality on borders. Now we should not feel insecurity and become a trading nation. State will have to end any type of support to militants, extremists. Missing persons in Balochistan are now coming back homes which is a very positive change, he discussed.

Curbs on freedom of expression is deplorable. Social justice must be ensured as state has no religion and should not interfere in religious practices by any minority. Armed forces, judiciary, politicians and all other institutions should join hands and work for the prosperity of nation and country, he underlined.

We have lost Pakistan of Father of the Nation Quaid-e-Azam Muhammad Ali Jinnah and there is quarrels between Pakistan of Bhutto and Zia. First elected civilian Prime Minister Zulfiqar Ali Bhutto gave this nation constitution of 1973 which was bulldozed several times but still country is moving with it, he recalled.

I am witness of many incidences including hanging of Bhutto, Akbar Bugti tragedy etc. I never bowed down against illegal orders of superiors even of than President of Pakistan. General Kiyani changed the military doctrine which was carried on by General Raheel Sharif and now by General Bajwa. Civilian and armed forces leadership decided to wipe out non-state actors which is a good sign, the writer opined.

Tariq Khosa said that Punjab is centre of extremists and militants and now we have to see what actions will be taken by government. PTI has given good role model of KP police and they should be given the credit. Police should be made accountable but it must be an autonomous force, he concluded.

In his remarks, Chairman KCFR Ikram sehgal said that reforms are needed in police department which will also bring more relief to common citizen. He referred content of the book and lauded services of Tariq Khosa.