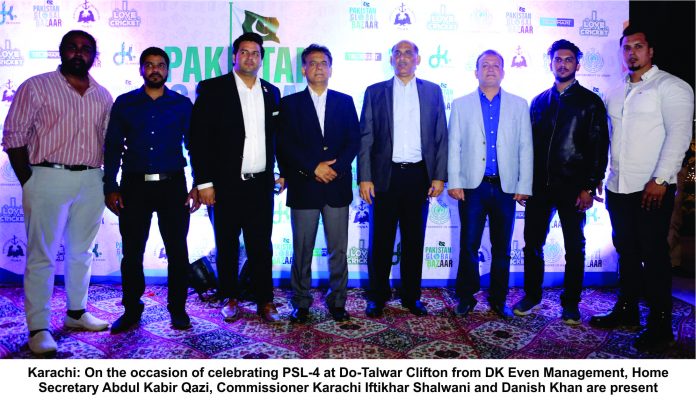 THE CITIZENS ZEAL AND FERVOR FOR PSL IS HIGHLY COMMENDABLE, SAEED

THE INAUGRATION OF PSL IN KARACHI IS A SIGN OF TOTAL PEACE, ABDUL

BEEN MADE, DANIS KHAN

KARACHI: Under the supervision of DK Management for PSL season 4 special
lighting arrangements made at Two Talwar Clifton, and players statue, large
size pictures and portraits draws total attention of the citizen of Karachi, Big
size screens have been put on place to show live matches, in the first night
huge fireworks were displayed and hundreds of people visited the spot and
enjoyed national songs as well the new song which has been made for PSL.
Youth and children danced on the tune of new song and enjoyed fully. The
provincial municipal Minister Saeed Ghani, Home Secretary Sindh Abdul Kabir
Qazi and commissioner Karachi Iftikhar Sherwani visited Do-Talwar Clifton. On
the occasion Saeed Ghani stated that for the PSL the excitement of the citizens
of Karachi is commendable, the Karachiites are crazy for cricket. The home
secretary Sindh that the inauguration of PSL in Karachi is a sign of total peace.
Commissioner Karachi Iftikhar Sherwani said that the DK event Chief Executive
Danish Khan has made lot of good efforts to decorate the Do-Talwar
roundabout which indicates his sincerity, zeal and fervor. For the security of
PSL players, fool proof arrangements had been made and special security
forces will be deputed for the safety of citizens of Karachi as well as the
players. On the other hand, large TV screens have been put on place to show
live matches and special lighting arrangements have been made as well as
further fireworks will be displayed, as stated by Danish Khan.