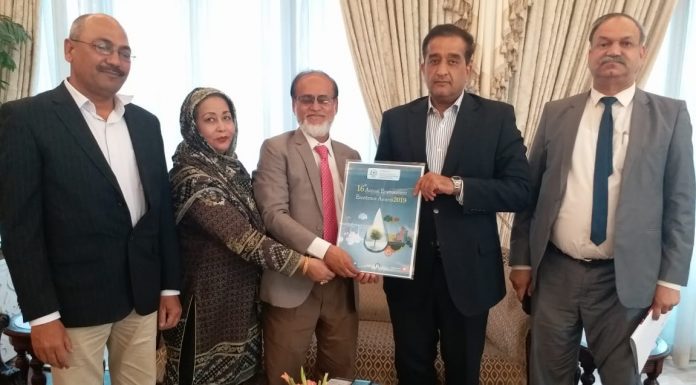 Karachi
Federal Climate Change Advisor Malik Amin Aslam has said that the present government has the utmost resolve to fully support all the concerned non-governmental organizations, which will promote tree cover in any part of the country as part of the Clean and Green Pakistan initiative of the Prime minister. The aide to the PM on Climate Change stated this as a delegation of the National Forum for Environment and Health (NFEH) led by its President Naeem Qureshi met him.

The meeting mainly took place to brief the PM’s aide on activities of the NFEH and hold a discussion on the upcoming 16th Annual Environment Excellence Awards and Conference-2019.
Speaking on the occasion, Malik Amin Aslam appreciated the role of the NFEH in safeguarding the environment in the country as one such right step was doing tree plantation campaign in Karachi. All such efforts to protect the environment should be duly acknowledged, he said.
The NFEH President informed the Federal Advisor that the ceremony of the 16th  Annual Environment Excellence Awards and Conference would be held in July this year.

He said that this award had been instituted to promote the importance of the environment among the concerned public and private sector organizations. While at the same time these organizations should fulfill all their obligations regarding environmental protection including conducting tree plantation campaigns in their surrounding areas.

Mr. Qureshi invited the PM’s Advisor to attend the forthcoming award ceremony and conference on the environment as its chief guest.
The PM’s Advisor on Climate Change on the occasion performed launching of the 16th  Annual Environment Excellence Awards and Conference.
He said that corporate entities were under solemn obligation to perform their due role to safeguard the country’s environment.