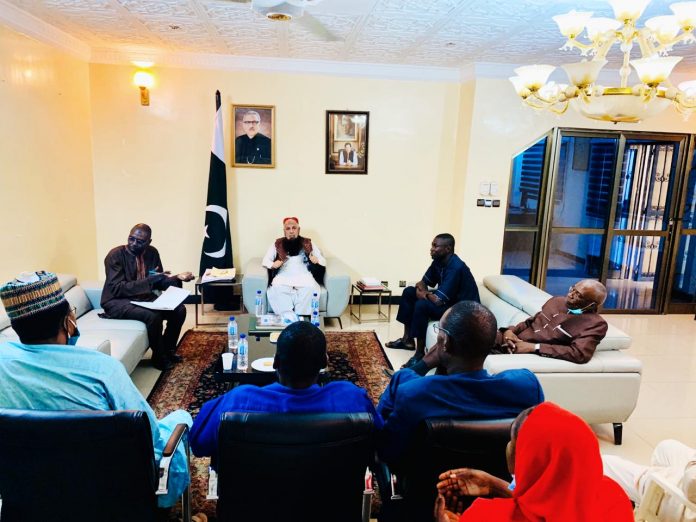 (Niamey: 31 st May 2020 ) Mr. Ahmed Ali Sirohey invited journalists from leading newspapers and briefed them about Pakistan. They were enlightened about the struggle for Pakistan and progress after independence. He informed them that how Pakistan achieved food self-sufficiency and the status of the semi-industrialized nation. The development of health, education, and pharmaceutical sectors were obtained with dedication. The SMEs and establishment of industrial clusters at various cities were established. Pakistan created deterrence against the imminent threat from the hostile neighbor. The issue of Kashmir remained unresolved after the lapse of 72 years despite persistent efforts by Pakistan.

The journalists asked questions on different issues. The journalist from the leading french newspaper Let Sahel asked about the success against of terrorism. The Head of Mission replied that it was the resolve of our nation and valiant armed forces who thrashed the menace. We sacrificed thousands of people including uniformed personnel in this fight and with the full support of the nation won the war.

The NTV reporter asked, who controls Kashmir, and what is the situation in the state? The HoM answered that the major portion of Jammu and Kashmir is under Indian occupation. India revoked article 370 which ensured autonomy to state in August 2019. It imposed a curfew, killed, tortured, and incarcerated political leaders since August. they have changed the status and divided disputed territory in two union territories. They are now trying to change the demography of the state by allowing Hindus from India to get a domicile certificate and settle.

The Pakistani part of Jammu and Kashmir is enjoying full autonomy. It has its own president, prime minister, and Parliament. They have a special quota for jobs in Pakistan but no Pakistani can get a job or buy property in the state. It’s completely peaceful.

The journalists asked many questions about Pak Niger relations. The assistance to Nigeria in agriculture, education, health, and industry. He replied that Pakistan is ready to support the Niger republic in its quest to achieve food self-sufficiency and industrialization. The journalists appreciated Mr. Ahmed Ali Sirohey Head of Mission for his detailed information and straightforward answers to questions.