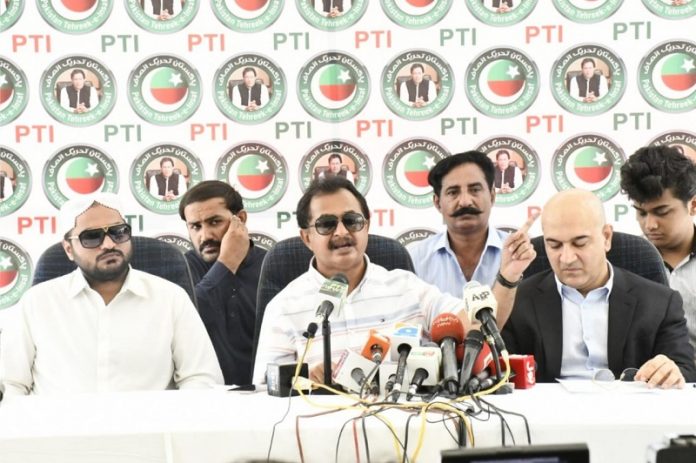 Karachi, Sep 27: Prime Minister Imran Khan is a brave leader of not only Pakistani nation but also of whole Muslim world and he represented whole Ummah during his speech in the United Nations (UN) general assembly, said Pakistan Tehreek e Insaf (PTI) Vice President and leader of parliamentary party in Sindh Assembly Haleem Adil Sheikh, addressing a press conference here on Sunday.
According to details, after his three-day visit of the rain-affected areas of Sindh, Haleem Adil held an important press conference at the Hunaid Lakhani Secretariat, flanked by Hunaid Lakhani and other leaders.

He said our Captain Imran Khan represented Muslim Ummah in general assembly of the UN. He talked about terrorism of India and highlighted the Kashmir Issue. He took a firm stand on the issue of Palestine. He spoke against the tactics of rich countries to safeguard money laundering. He had already taken brave steps to contain spread of coronavirus in Pakistan. He is a brave leader of 22 Crore Pakistanis and we salute him.

Haleem Adil said before Imran Khan no other Pakistani Prime Minister had shown such courage. He also raised the issue of the murder of 11 Pakistani Hindus in India by the terrorists of BJP. He said Allama Iqbal had dreamt about such a brave leader like Imran Khan for Pakistan and Pakistan had badly needed a leader like him.

He said Sindh after the 18th amendment is getting full funding from the federal government through NFC Award, but sadly Sindh government is not assisting the people of Sindh. He reminded CM Murad Shah that NDMA is also a federal department which had sent huge relief goods to Sindh. He said he personally had visited Mirpurkhas, Umerkot, Sujawal and Golarchi but saw nowhere the aid and assistance of Sindh government. He thanked Prime Minister Imran Khan, brave armed forces and Governor Sindh who sent 0.1million rations bags to the affected areas of Sindh.

He said the areas of Daur, Khipro, Sindhri, Hussain Bux Marri, Mirwah, Jhudo, Mirpurkhas City, Umerkot, Samaro, Pithoro and others are still submerged in stagnant rain and floodwater and a large number of people has already become displaced. He asked why the Sindh government has not reached to these areas so far. He said every year federal government gives billions of rupees to Sindh government. He said Sindh government said they would give 2million ration bags but it did not gave even 20000 ration bags. He said in Tharparker RO plants of Rs700 billion are closed including the largest RO plant of Asia. He asked the chief secretary should initiate an inquiry into this matter.
He said we will support Bilawal Zardari if he launches a protest drive against burning issues of Sindh. He should protest against making Karachi a Katchra Kundi. He asked Bilawal to start a drive against AIDS, against encroachments on waterways and against mega corruption in irrigation department.

He said we would start of drive from Larkana on theme of ‘chase away PPP and save Sindh’. He said a big drive is needed to offset the harms of the corruption of past governments. He said in 2009 the PPP government gave the license to what he called Killer K Electric. He demanded to take action on complaints against the K Electric.
However, Hunaid Lakhani said that the APC was held to save corruption and corrupt people. He said Umerkot, Badin and many other areas of Sindh are still inundated in rainwater. He said if anyone wants to start a campaign he should start a drive for educational reforms.

MAJU AND FC-JHD SIGNED MOU FOR CONCESSIONS TO STUDENTS.