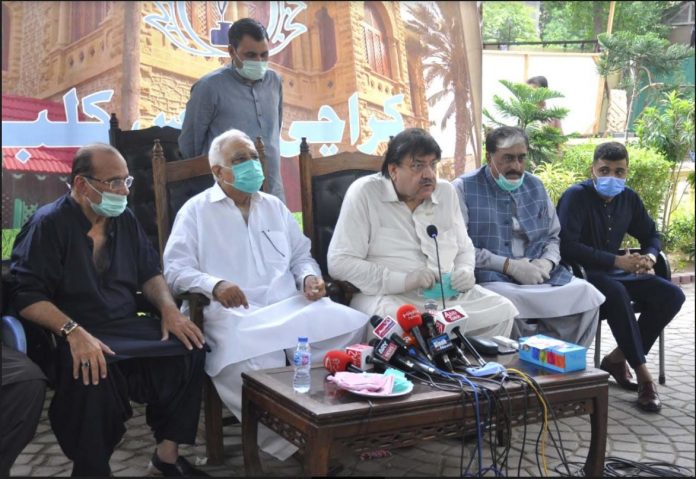 Karachi: Karachi is not heirless; we are the real heirs of this City. Sindh government is the corrupt and federal government is incompetent, We are not bounded with PTI Leadership these views were expressed by GDA Information Secretary Sardar Abdul Rahim in a joint Press Conference held at Karachi Press Club along with Irfanullah Marwat, MPA Nusrat Sehar Abbasi, Nand Kumar Goklani, NPP General Secretary Naeem-ur-Rehman, Functional League Sindh Vice President Syed Shafqat Hussain Shah and Karachi Convener Barrister Arshad Baloch reported during this week. On the occasion, GDA spokesman Sardar Rahim said that people are suffering due to incompetence of both Provincial and Federal governments and fed up with the worst load shedding of electricity. He said that other companies should be given a license to supply electricity to Karachi by eliminating K- Electric role. Irfanullah Marwat has said that we are definitely allies of the government but we are not bounded, unity can exist and it may be ended at any time, Imran Khan is in the pain for his people but he handed over the government to the Kids who are playing the whole  day. How GDA can resolve the Public various issues, the level of patience of the people is more than enough.GDA daring leader, Member of Provincial Assembly of Sind, Ms. Nusrat Saher Abbasi said that hundreds of girls including innocent ministers were killed in Murad Ali Shah’s constituency. There are visible marks of torture on their bodies.No government official or PPP leader visited their homes for Condolence, Did the  C.M.Sindh cares about his Peoples, he has no right to hold up his office. She Concluded.