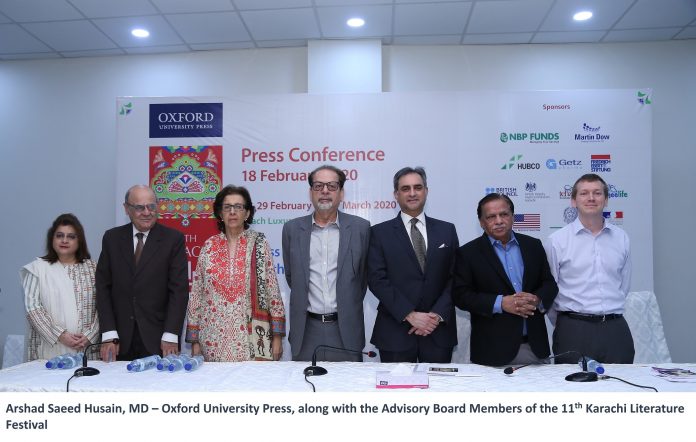 speakers and authors from Pakistan, UK, USA, France, Germany, and Italy will participate in the event.
There will be over 80 sesions featuring talks, panel discussions, Urdu and English mushaira, readings, performing arts, and film screenings.

Around 22 books will be launched at the festival this year. Of special significance at the
11 th KLF is a session planned for performance poetry and a workshop on‘Media Literacy and Misinformation’. This year an art exhibition titled ‘Ahang:
Peaceful Protest against Warfare around the Globe’ will showcase videoinstallations and new media art.

Speaking on the occasion, Arshad Saeed Husain said, “The 11 th KLF will feature a number of sessions that will look at how the written and spoken
word connects across borders and results in a cross-pollination of ideas and inspiration for literary works. The festival aims to bring together not only the stalwarts of Pakistan’s literary world and academia, but also some of the most creative minds beyond Pakistan’s border.” He further added, “Through its vibrant programme, the festival celebrates cultural and linguistic diversity.”

While talking to the media, Arshad Saeed Husain mentioned that this year four prizes will be awarded from the KLF forum. These include the KLF-Getz Pharma Fiction Prize, KLF-Habib Metro Non-Fiction Prize, KLF-Infaq
Foundation Urdu Literature Prize and KLF – Arts Council Sindhi & Balochi Prize. The submissions received for these prizes are evaluated by panels of jury members comprising eminent critics, writers, and scholars. Books
shortlisted for the KLF-Getz Pharma Fiction Prize were announced at the press conference, which include Call Me Al by Sheheryar Sheikh, The
Miraculous True History of Nomi Ali by Uzma Aslam Khan, Red Birds by Mohammed Hanif, and The Selected Works of Abdullah the Cossack by H
M Naqvi. While sharing his views at the press conference, Salman Tarik Kureshi, poet, columnist, and member of the KLF Advisory Board,

This is not goodbye: Emirates ground crews give an emotional send-off...