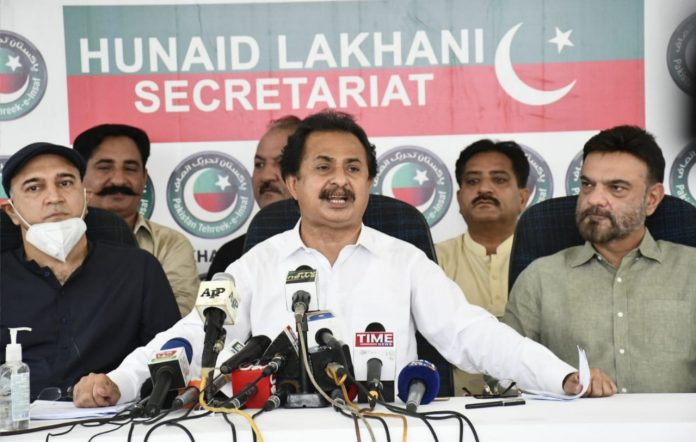 Karachi, July 08: Karachiites have been suffering immense troubles during an ongoing spell of rains due to the inefficient provincial government of the PPP, said Pakistan Tehreek e Insaf (PTI) Vice President and leader of the parliamentary party in Sindh assembly Haleem Adil Sheikh, here on Wednesday.

Addressing a press conference at Hunaid Lakhani Secretariat, flanked by Baitul Mal Sindh President Hunaid Lakhani, PTI leaders Agha Arsalan, Sumair Mir Sheikh, Jam Farooq Ahmed, and others, he said the monsoon rains are considered as a blessing but the corrupt PPP rulers of Sindh have made them the source of tormenting Karachiites. He said in a rain of one hour more than 6 people lost their lives. He said the World Bank had given money to clean gutters of Karachi but no one knows where these funds went. He said the gutters are overflowing in almost every locality of the megacity.

He said our MPs are protesting against the K-Electric (KE). He said in 2009 the Zardari government had an inked a deal of giving KESC to Abraaj Group till 2023 and the Karachiites are paying the price of this shoddy and murky deal. He said the KE is extorting money from the citizens of Karachi under different pretexts. He said; however, we will not allow the owners of the KE to flee but will make them accountable before the public. He said they have to return back the money of copper wires of the megacity stolen by them. He said out federal minister Omar Ayub has told in a press conference that the KE had to invest $2billion, but it did to invest this amount. He said Sindh Governor Imran Ismail is also supporting our stance against the KE.

Talking on the issue of JIT reports, Haleem Adil said the advisors of the PPP government have been befooling the public for the last five days. He said the innocent face of Murtaza Wahab is being presented before the public, adding why the faces of hardened criminals are not being presented to the public who was patronized by the PPP. He said Murtaza Wahab reads whatever paper they hand to him. He said Murtaza should go to the Cheel Chowk Lyari along with him and ask from Lyariites whose henchman Uzair Baloch was and they will tell him that he is the henchman of PPP. He said everyone will tell on whose orders Uzair had formed a gang. He said the true JIT report is with Ali Zaidi and signatures of two police officers are not on this JIT report. He said after the new police order, police officers in Sindh are afraid of the government and they are being used by the PPP government in its wrongdoings.

Haleem Adil said the tragedy of Ali Enterprises Baldia factory fire was the worst manifestation of the criminal politics of Karachi. He said the affectees of Baldia factory fire are yet to get justice even after the passing of four years. He said 250 people were burned alive after the factory owners refused to pay extortion. He said both the PPP and MQM-London are involved in this grave crime. He said Rao Anwar and Janwiri worked for the PPP. He said now the Supreme Court would decide which JIT report is true and which one is fake. He said the real faces of those people who changed the JIT would soon be exposed.

Haleem Adil said Ali Zaidi is a brave son of Karachi. He said there are also laudable services of Dr. Arif Alvi and Imran Ismail for the megacity Karachi. He asked Saeed Ghani to answer the questions raised in the report of police officer SSP Shikarpur Dr. Rizwan.