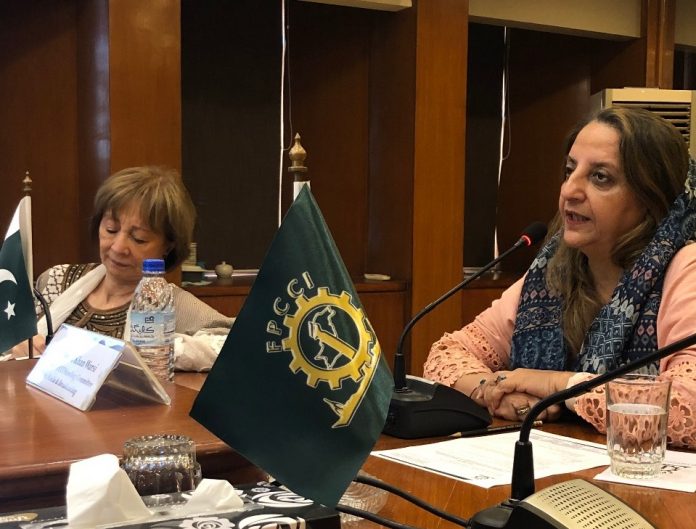 Karachi, July 2020: FPCCI Central Standing Committee on Media and Broadcasting held its second meeting here today via Zoom from FPCCI. The objective of the meeting was to highlight the issues being faced by an important sector of media — those involved in PR, Events, Digital, and Activations. For this purpose, founding members of PREDA, a Council representing PR, Events, Digital and Activations companies, had been invited to share their issues resulting from the lockdown owing to Covid-19.

Usama Khan Warsi the convener of the committee on Media and Broadcasting had authorized his deputy-convener, Shanaz Ramzi, who is also the chairperson of PREDA to host the meeting. Presiding over the meeting were senior leader FPCCI Mian Zahid Hussain and vice president FPCCI Khurram Ijaz. Among those attending the session were guests of honor former VP FPCCI Saquib Fayyaz Magoon and Seema Taher Khan, and chief guest Nida Khufu, MPA PPP from the government of Sindh who attended the session in person. PREDA was represented by Frieha Altaf (SVP PREDA), Selina Rashid (VP PREDA), Ahmed Jang (Hon.Sec PREDA), Farishteh Aslam,  Anisa Khan, Tehmina Khalid, Hasan Rizvi, Sarfaraz and Jehanzeb, Rasikh Ismail and Phebe Haroon — all founding members of PREDA.

The participants pointed out that regardless of whether they are running PR or digital companies, or of event management and activations, businesses have been sorely affected, as in the case of the former two, celebrity clients are not being able to afford retainers with PR agencies as they are out of work themselves, while in the case of the latter no events are taking place. Considering that overheads are the same and employees have to be paid their monthly salaries, if the government does not intervene, they will have to start laying off people. The intervention required is to ensure the bare survival of these companies in these trying times. All allied jobs and professions such as vendors involved in making sets, florists, etc, are also now without jobs and livelihood opportunities because of these companies suffering financially.

There were four basic and reasonable demands of the participants:

Khuro assured the speakers that she would take these demands to the government and help in whatever way she could. Mian Zahid Hussain also offered his support. The chair informed that PREDA had also reached out to an advisor to the prime minister on finance and revenue, Hafeez Sheikh, and was hoping for a positive response from him.

Google is making the premium version of its workplace video chat...