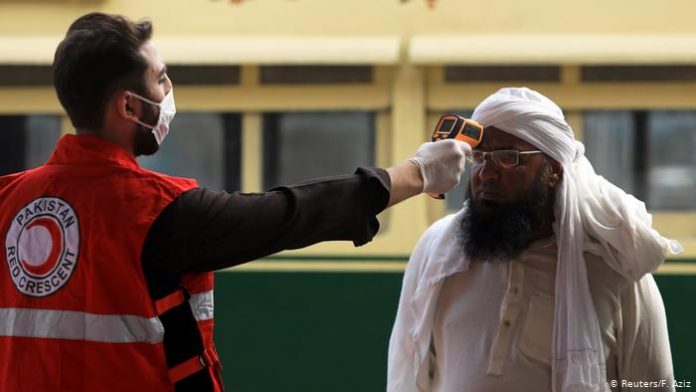 Action is the privilege of the brave, procrastination is the virtue of the coward. With great power, comes great responsibility demanding those at the helm of country’s affairs to carve out common ground to face any crises.

The contagious- novel coronavirus looming large over multitudes of the population has exposed leadership crises and failure of the PM to play on the front foot and be the person guiding provinces and carving out common COIVD-19 containment policies to be followed by all federating units.

The leadership crises are the biggest problem in Pakistan.

Faced with  no federal guidance and common execution plan as for as the COVID-19 combating strategy was concerned;

On the heels of COVID_ 19 cases in the province, CM of Sindh -the hardest hit province – blazed the trail in taking precautionary measures. He sprang into action ordering the closure of all educational institutions followed by the closure of hotels and restaurants reducing them to home delivery and takeaway order as a measure to protect people from contracting the disease being highlighted. Banning transport was part of the same security measure.

Quarantine centers were established throughout the province. Exact information about those who tested positive was shared with the public and international media outlets. .This urgent administrative intervention initiated to combat the spread of the potentially deadly COIVD -19, earned CM Sindh, international accolades and appreciation from the World Health Organization (WHO).

Without a doubt, Murad Ali Shah stands taller than the PM of Pakistan in terms of political stature and devising a timely corona virus-containing strategy. The Federal Government acted very shortsightedly by taking no timely action and putting in place no mechanism of properly quarantining those returning from Iran- the then country with highest Coronavirus causality outside China – the then epicenter of

Coronavirus. The people were thrown out in overcrowded camps at the Taftan border with no required necessary arrangements in terms Of testing the Zairian (pilgrims). According to Dr.Zafar Mirza, the Special Assistant to Prime Minister on National Health, 78 percent of corona virus patients had come from Iran.

With the increasing number of COVID-19 casualties, the government of Pakistan should have collected data of Zairians in Iran and made appropriate action to overpower the spread of the pandemic. Neither monitoring nor testing the pilgrims coming from Saudi Arabia and Iran were put in place at airports, nor were those coming from other countries were properly tested and quarantined. The well-known literary figure, Noorul Huda Shah, had exposed the absence of a mandatory mechanism elaborated above when she returned from Saudi Arabia.

The Federal Government awoke from a deep slumber and convened a high powered huddle with chief Ministers in attendance ending without a uniform formula to frustrate the spread of the deadly disease.

Due to both late and muddled OVID 19 -response, the public will have to pay a heavy price in terms of contracting incorrigible Coronavirus.

The other day, the Federal Government suspended international flights to and from Pakistan with the exception of cargo planes as a measure to safeguard the citizens. According to National Security Advisor Moeed Yousuf, the tough decision was taken for the safety of the citizens.

However, such decisions should have been taken much earlier including banning of inter-provincial railways.

Pakistani Scientist in Germany, Dr.Ghulam Mustafa Bughio, believes that lack of understanding with regard to severity at various levels about the coronavirus pandemic, which spreads like wildfire, is going to be very fatal for Pakistanis. The expert Infectious Diseases, Dr.Naseem Salahuddun joined the course of concern conveyed by Mr.Bughio having said that cluster of people seen standing so close at railway stations and subsequently traveling together is a matter of grave concern.

“The number of patients will rise and death toll In Pakistan could be in tens of thousands given the joint family system and the silently infected patients without apparent symptoms commonly associated with the disease resulting in infecting others”, she warned.

In his COVID -19 address to the nation, the PM  neither offered a  roadmap, direction or execution plan to provincial chief Ministers; nor much needed economic package was announced to help the provincial governments. This speaks volumes about the PM being ill-prepared to face COVID19, which has rocked the world with 15 thousand human causality and over three lack people becoming patients of coronavirus all over the globe. It was both unconvincing and unprofessional speech. Green with envy; the PM neglected the Sindh CM who was highly appreciated by the WHO for taking urgent precautionary measures to stop the spread of the novel coronavirus. The public expected the PM giving a pat on the shoulder of Murad Ali Shah for prioritizing institutional action, but the premier showed political narrow-mindedness. This is why people from across the sections of the society justifiably poured vials of wrath over PM for having neglected the CM, who was actively engaged in making all-out efforts to undermine the proliferation of the pandemic.

The policies implemented by the CM Sindh, are the policies that are being put in place in other provinces thus giving a clear message that CM Sindh’s team and advisors were visionary.

Prime Minister Imran Khan opposed the lockdown policy touted by the PPP Sindh government on the ground of the county’s fledgling economy and economic suffering of daily wagers. Undoubtedly, our economic conditions pale before the European States and some Islamic countries placed under lockdown. But the problem is that the lockdown plan is the only sustainable solution to stop the spread of the COVID19.

Administrative acumen and proper modus operandi are the qualities that come handy in testing times.  Mr.Shah was well aware of the lockdown of Wuhan in China as an effective weapon to put out the proliferation of the contagious disease under our discussion.

Despite stiff opposition offered by Islamabad, taking a page from the book of China, Murad Ali Shah after having consulted with law enforcement agencies and taken all political forces in the province on board,  announced the lockdown of the province calling it to be _Care for You_ necessitated by the non-serious attitude of public towards self -isolation and social distancing advised by the province as well as health professionals called epidemic experts.

“Senior journalist Mazhar Abbas in his recent TV.talk show expressed his displeasure over federal government ‘s state of inertia, adding further he said, “the policies applied by Sindh ultimately will have to be followed by the other provinces “. Other independent analysts and observers expressed the same. This happened. Gigitbalitistan, Punjab, KP, Azad, Kashmir, and Baluchistan followed the move made by the Sindh Government. It would not be an exaggeration to suggest that Murad Ali Shah is leading Pakistan in the COVID_19 war with due diligence.

Mishandling of the COID_ 19, and misunderstanding of its magnitude was not confined to PM only; CM Punjab after taking a thorough briefing by the officials concerned is quoted to have asked “How does the Coronavirus bite?

Also, the Punjab Governor, Chaudhry  Sarwar, floated the idea that by having warm water, people can kill coronavirus.

While the federal government was in deep slumber, the Sindh government was actively engaged in devising plans to protect people from contagious corona virus-incorrigible -by advising self -isolation and social distancing ensured by the lockdown. It is pertinent to mention here that the much-needed lockdown plan was opposed by the very person who had blocked the capital of the country for 126 days in order to achieve petty political ends.

Actually,   the PM has a streak of Hamlet, a character in Shakespeare’s drama “Hamlet “.

Earlier, the Hamlet -Like “to be or not be” about going to the International Monetary Fund ( IMF) had put the PTI led government in hot water in terms of economic management.

The same attitude was applied in the wake of COVID_19 combat, which was akin to pushing the population to be infected and to be put on ventilators. Prime Minister Imran Khan needs more learning and less talking, and needs come down a peg or two. Admittedly, a smart move made by Murad Ali Shah in the right direction followed by his counterparts will surely help contain the pandemic to a considerable level. However, some extra measures are to be taken.

Mass screening of the population is a big challenge. In challenging times, urgent professional engagement is of paramount importance.  The healthcare system of the developed countries fighting coronavirus is under stress, the medical staff in those countries has conveyed their concern in no uncertain terms that it could collapse under the heavyweight of an ever-increasing number of patients battling with Coronavirus. Imagine the scale of a shortage of medical apparatus and hardships faced by health professionals in advanced countries According to.Dr.Rinesh Parmar, the chair of the Doctors’Association Uk, doctors have threatened to quit National Health Services( NHS) over the shortage of personal protective equipment (PPE) recommended by the WHO. American President Donald Trump ‘s appeal to Asian and European partners for medical equipment supplies does suggest a global shortage of the medial material needed for frontline fighters in the COVID_19 battlefield. Julian Borger in his recent write-up titled “ Trump privately appeals to Asia and Europe for medical help to fight coronavirus” claimed that “behind the scenes, the Trump administration has approached European and

Asian partners to secure supplies of testing kits and other medical equipment that are in desperately short supply in the Us.” One is dismayed that despite lockdown imposed in the country, scores of people have been arrested from across the provinces for violating the security policy i.e. .lockdown. This is a sheer show of irresponsibility. Eight people have left for eternity on the wings of coronavirus so far in, and there over one thousand confirmed victims of the disease in the country.

We are a poor economy; we have neither infrastructure and resources nor institutional capacity to combat the disease as some other countries are performing. Under such circumstances, self -responsibility in terms of acting upon the advice given by health professionals and understanding the spirit of the COVID_19 shutdown _ a state of isolation or restricted access instituted as a protection measure_ is our prime duty.

How students of interior Sindh made it