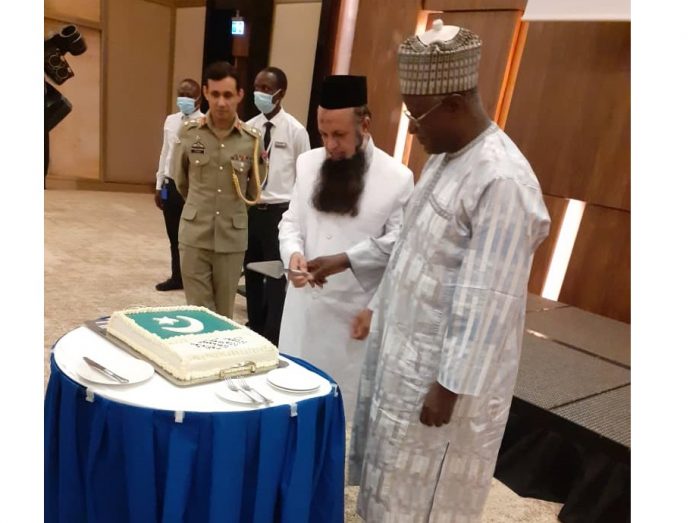 Pakistan Embassy Niger celebrated the defense day of Pakistan on 11 September 2020. The minister’s defense was the guest of honor.  The ambassador Mr. Ahmed Ali Sirohey in his speech gave details of the war including causes. He said the major reason was and remains are Kashmir.  Indian occupation and brutalities are going on. The international community must play its role to resolve this longstanding issue that caused enmity between Pakistan and India.  The people of Pakistan stood with the armed forces and foiled the attempt of the enemy.  In 2019 once again Pakistan sent a clear message that each intrusion would get a befitting response.  At the same time, we offered an olive branch by releasing the captured pilot.

The defense adviser col. Iftikhar khattala gave salient in 1965 was the role of armed forces. He also highlighted Pakistan’s role in the war on terrorism. The preparedness of Pakistan for any eventuality.

The function was attended by the ministers, parliamentarians, civil and defense officers, ambassadors, defense attached, civil society activists, academia, the business community, media members and Pakistani community members living in Niamey.  The participants after the speeches and presentations showed surprise that Pakistan faced such an existential threat.  They appreciated Pakistani restraint and response in 1965 and 2019. Moreover,  they expressed that why it was not communicated to the people of Niger,  a brotherly country. While looking at the facts about Pakistan and worth visiting places, the ministers desired that they would like to visit Pakistan at the first available opportunity.  The business community showed readiness and keenness to explore Pakistan that he such a large number of products.  The ambassador thanked everyone and invite6for a sumptuous Pakistani dinner.