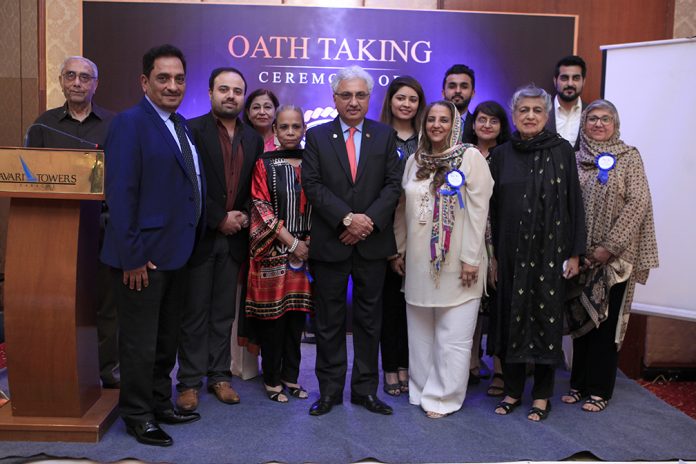 Karachi, April 12, 2019: The formal oath-taking ceremony of the newly elected members of RCK – New Central was held here today at a hotel with media and high-profile guests present to witness the ceremony.

The host of the evening Shehzad Abdullah member and chair of Rotary Foundation committee welcomed the guests and set the ball rolling with the recitation of Holy Quran followed by the national anthem. Shanaz Ramzi charter president of Rotary Club of Karachi New Central addressed the guests and gave an impassioned speech about the plans of the club, after which her award-winning documentary ‘Salute to Karima’ based on the erstwhile beggar community at Makli was presented, to throw light on the kind of work that her club would be focusing on. It was an eye-opening presentation of the transformation in their lives and the way forward for any organization who may wish to adopt the same steps to change the lives of similar communities.

Past District Governor Mr. Iqbal Qureshi then took oath of the office-bearers and general members of the club. Office bearers were presented with badges as mementoes of the occasion.

The evening concluded with vote of thanks followed by high tea.