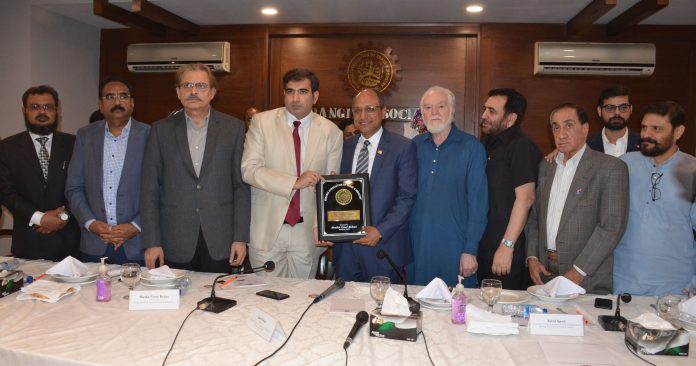 Karachi: Provincial Minister for Labour, Education Literacy and Human Resources Saeed Ghani has said that with the help of NADRA, the Sindh Government is taking actions against the fake registration cards in SESSI and smart cards are going to be made of 6.5 lakh workers. He said
that with this work, all genuine workers who are truly deserving will be benefited.

TheProvincial Minister highlighted that Mayor Karachi is talking about taking power away from him, however, this is not the reality. He shared that local tax system has been given to district and
more power is being given to union councils. Mr. Saeed informed that he will support industrialists of Korangi Industrial Area in their plantation drive.

He mentioned that even if the government wants, issues of schools can’t be resolved completely. All those who worked with us in building schools on the basis of public-private partnership, are being run successfully and
we are ready to work on such projects, he added. He said that he will speak with Chief Minister Sindh regarding the industrial ground. He was expressing these views while addressing
industrialists and businessmen of the Korangi Industrial Area. On this occasion, President KATI
Sheikh Umer Rehan, Chief Executive & CEO KITE DMC Mohammad Zubair Chhaya, Chairman Labour, SESSI & EOBI Zahid Saeed, Senior Vice President Mohammad Ikram Rajput also
addressed to the august gathering. Senator Abdul Haseeb Khan, Gulzar Firoz, Danish Khan, Sheikh Manzar Alam, Farhan-ur-Rehman, Ehtesham Uddin, Basit Ikram and others were also
present on the occasion.

Provincial Minister for Labour, Education Literacy and Human Resources Saeed Ghani, expressed that President of Pakistan and Governor Sindh are from Karachi, but despite of it,
issues of Karachi have not been resolved. There is a representation of Karachi in the Federal Government, but no work has been done for the city and issues of business community remain
unaddressed. He highlighted that Federal Government is not interested to address issues related to EOBI. He also informed that Rs.

170 billion is with the Federal Government and court has already ordered to hand over this money to workers and all four provinces have
unanimously agreed that this fund should be allocated for provinces.

He added that in the CCI meeting, provinces agreed on this, however, the outcome was different. Mr. Ghani highlighted that the business community should decide that workers labour fund should not be given to the
Federal Government as it is the right of the provinces so that workers can be given facilities.

Mr. Saeed Ghani said that in the cantonment area and in DHA, we constructed roads as well as flyovers and only because of the lack of administration, there are issues in the country. He
underlined that if the business sector will be profited then government can ask for benefits of
workers.

For the lands of KPT, Railway and DHA, Mayor should ask the Federal Government, he said. Provincial Minister said that when the Mayor says that he can’t spend more than Rs. 2
Crore so this is the limit of the Mayor and then this matter comes to the Sindh Government and Sindh Government also has limitations to issue money, otherwise we would need to go to the
Federal Government. If the Federal Ministers would have addressed this issue properly, the situation would not have reached to this level. Every day, a Federal Minister is named as a focal
person.

Earlier, President KATI Sheikh Umer Rehan, in his address, expressed his serious concerns over the lack of interest to address industry issues and strongly protested against the attitude of
Ministers towards these issues.

He highlighted that looking at the attitudes of the Federal Ministers, it is evident that the Prime Minister has no control over his ministers. He said that
with actions of the government and because of its ministers, they themselves are creating obstacles for their government.

President KATI mentioned that federal ministers have no idea
of their ministries, how can they run the government.

Those who were most against the
protocol are now most using the protocol.

It is because of this attitude of respective ministers that the GDP ratio rather than increasing is on the downward side.
President KATI Sheikh Umer Rehan said that the government is not owning the industry of
Karachi.

He highlighted that to increase exports, establishment of effluent treatment plant is the need of the time. Even after number of letters and our demand, funds have not been
allocated for the combined effluent treatment plant. Zahid Saeed that with the help of the
Sindh Government, we are ready to plant 1 lakh trees. KATI does not require fund or place, but the support of the provincial government and therefore, the Sindh Government should make an
agreement with KATI to plant trees.

KATI will itself sponsor for tree plantation. He said that KATI with its own expenses will construct roads and sports stadiums, however to improv the
situation of the Korangi Industrial Area, support of the Sindh Government is needed. Mohammad Zubair Chhaya said that despite of the fact that economy of Pakistan is in poor condition, it is the industrialists who are running the economic engine of the country.

He highlighted that if there are more rains this year, the river bed of Malir will be submerged and
there is a serious threat posed to Karachiites.

A SEMINAR CONDUCTED ON ‘WORLD HEALTH DAY’ AT SSU HEADQUARTERS