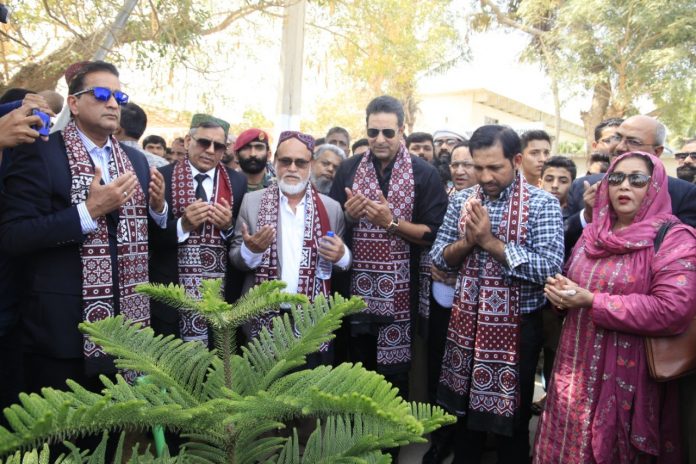 Karachi: Advisor to Prime Minister on Climate Change Malik Amin Aslam has said that around two billion trees will be planted in Sindh in next five years under a recent greenery drive launched by Sindh Forests Department in collaboration with the non-governmental organizations including the National Forum for Environment and Health (NFEH).

The Advisor to PM stated this on Wednesday while speaking at the launching ceremony of a tree plantation campaign here at PIA Township.
Aslam said on the occasion that up till now 150 million tree saplings had been planted in the entire country under the drive of the present government to do afforestation under the banner of Green and Clean Pakistan initiative.
He said that plantation drive would be done in the country with the help of the major national institutions and public sector organizations like the Pakistan International Airlines.
Also speaking on the occasion, CEO and President of PIA Air Marshal Arshad Malik said that tree plantation campaign had been kicked off in the areas around PIA Township, surrounding roads, streets, and playgrounds in Karachi.
He announced on the occasion that PIA would name any one of its parks after the martyrs of the recent tragedy of mosques’ firing in New Zealand.
Special plantation will be done in this park, he said.
The PIA CEO also paid tribute to the sacrifices rendered by the martyrs of New Zealand terrorist incident. Famous cricketing legends Wasim Akram and Ahmed also attended the ceremony. While speaking on the occasion, they appealed to the children and other people to wholeheartedly take part in the tree plantation campaign under of the present government.

Also speaking on the occasion, NFEH President Muhammad Naeem Qureshi said that his NGO had been supporting tree plantation campaign at a number of locations in the city keeping in view advent of the spring season.
He said that playgrounds and vacant fields of the PIA would be utilized to plant 5,000 tree saplings during the current campaign to promote greenery. He said that awareness among masses would also be promoted to make them educate about of tree plantation in urban areas.

The distinguished guests on the occasion planted tree saplings at the park of the PIA Township along with children and also visited school of the area. The participants of the ceremony also offered Fateha for the martyrs of the New Zealand firing tragedy. Others who attended the ceremony included Director Sports of PIA Shoaib Mohammad, its GM Sports Shoaib Dehri, NFEH Secretary General Ruqiya Naeem, Engineer
Nadeem Ashraf, and Mustafa Tahir.